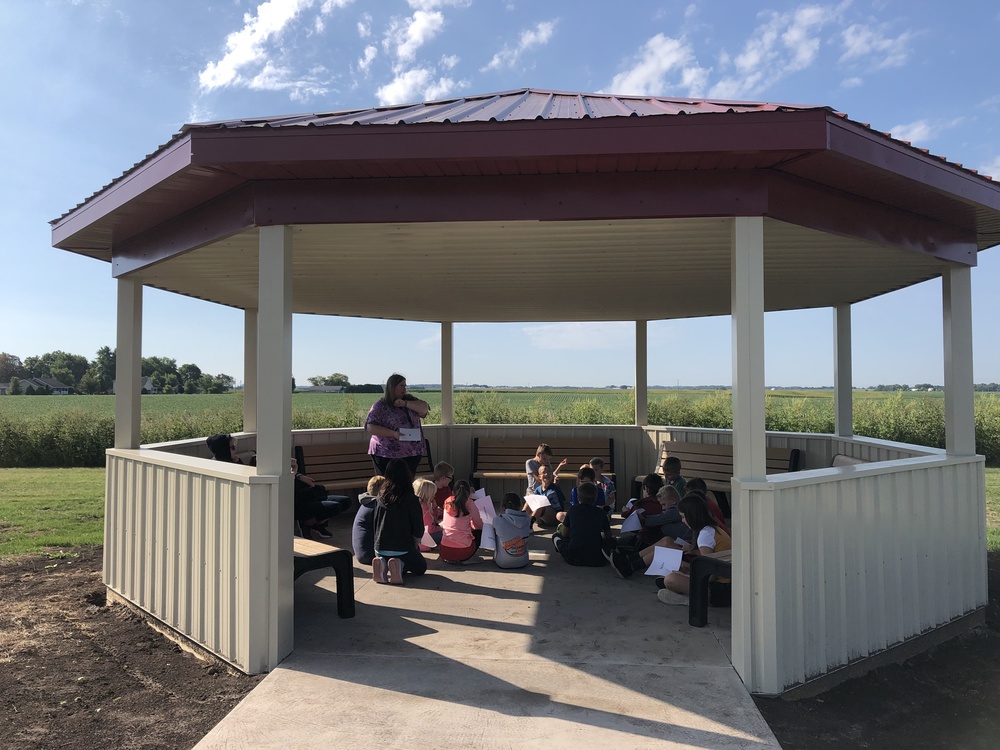 United North Elementary is helping shed some light on the learning process for its students. Literally.

Smithfield Foods, Inc.’s Monmouth facility sponsored a project to construct an outdoor classroom on the school grounds this summer. The global food company donated $26,000 to construct a handicapped-accessible outdoor learning facility, and a sidewalk extending from the existing school building to the structure. McKeown Construction in Alexis built the outdoor learning center, which is southwest of the school building.

The outdoor classroom has been used almost daily in the opening weeks of school.

The project was kept secret from students until November 2018, but school staff discussed such a structure for more than a year. The idea was generated after the school’s Parent-Teacher Organization sought fundraising ideas it could take on. Teachers were asked to generate ideas for potential projects that could have a significant impact on students’ education. A subsequent survey of staff showed overwhelming support for an outdoor learning facility. Teachers often took their students outside during nice weather, but students had to sit on the ground. At a PTO meeting, First Grade Teacher Jeri Kitchin suggested approaching Smithfield for help in funding such a project. In the last school year, Kitchin’s class and their ”classroom buddies” from Julie Knapp’s Fourth Grade joined to make a video to promote the project, embracing the theme “We want to learn everything under the sun!”

Smithfield embraced the idea as well, utilizing recycling funds from its Environmental Program to fund the project.

United North Principal Maggie Wallace cited numerous uses and benefits of the outdoor classroom. It can be used for reading, math, science, and writing lessons, music and art classes, for morning meetings, weekly student yoga, classroom buddy activities (older students pair up in a classroom of younger students to work with the latter), and to reward good behavior.

“It diminishes the barriers in learning, so students can learn without noise restrictions,” Wallace said. “They are also learning in nature, and it builds a partnership between our school and our community.”

“We are creating a partnership with Smithfield,” Wallace continued. She said the company wants to sponsor safety classes and other learning activities for students.

As part of Smithfield’s “zero landfill” goal, the environmentally friendly classroom was built in part with recyclable materials, she noted.

The octagonal classroom is a pole frame structure clad entirely in aluminum and steel, matching the existing school façade. It has seven partial walls and one entrance/exit.  It seats 30 to 35 students.

“I think an outdoor classroom would be good for kids, so they can learn about the outdoors and about trees and animals and grass.”

Student Laikyn Martin echoed a similar view before the project was built.

“I would like an outdoor classroom so we can learn how leaves change colors and how butterflies hatch and to learn about the kinds of birds,” she said.

A dedication ceremony for the classroom will be held at a date to be announced.